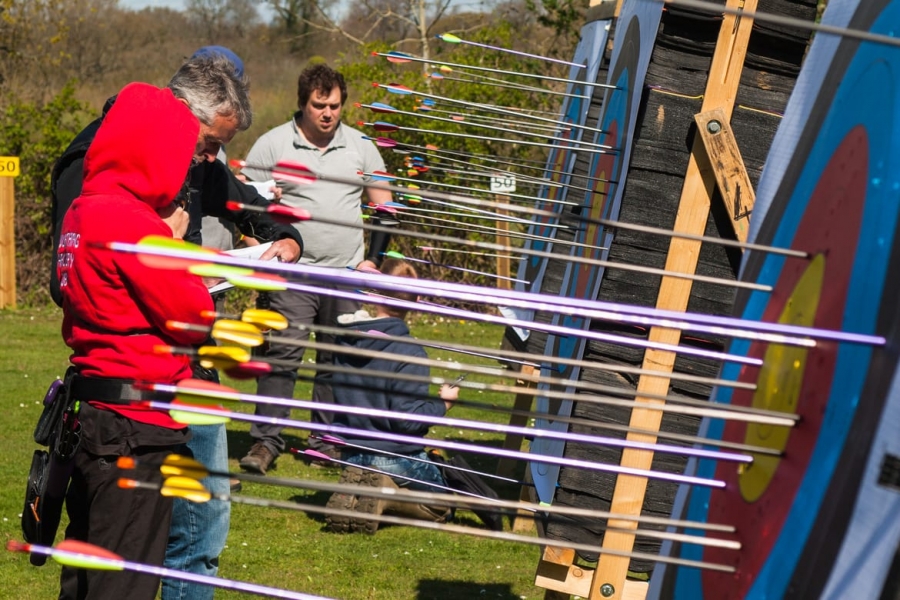 Worthing has a long association with the sport of archery. As long ago as 1860 Worthing Archery Society, occasionally also referred to as Worthing Archery Club, was shooting at Steyne Gardens just off the seafront. During Victorian times archery was a popular sport as it was practiced by many British monarchs and was considered a graceful exercise that taught dexterity. Archery was also one of the few sports in which women could compete alongside men, indeed archery was one of the first organised competitive sports for women. The details of the club that shot in Worthing during the 1800's has sadly been lost to history but what we do know is that the club in its present form was founded in 1949.

Records of the first club committee unfortunately do not exist but in 1959 the officers were:

Alderman Osland was the Mayor of Worthing, and when he died his daughter Gabrielle took over the position of President, and the club enjoyed many winter days shooting clouts in the field near their farm. The Club’s official home in those days was Worthing Football Club and all members were automatically members of the football club. This enabled them to use the ground for practice, matches and tournaments, and the hall for other events. The club was small at that time with around 20 members taking part in club events and tournaments. One innovative adventure was a league to compete against overseas archers which proved to be very successful; Worthing used to shoot against two Australian Clubs - Bunbury and Benara. Two of our members visited Benara, which is near Perth, and presented them with a silver plate. Also one of the Club’s members won the Bunbury postal league and still has the award.

Tommy and Elizabeth Dymock also set about forming the Sussex County Albion League in the 1950’s, designed purely to allow archers of all levels to meet others on a friendly basis, at their various grounds. This was another successful venture for the club, with the result that it is now implemented throughout the county and is still in existence. Now run by Sussex County it has developed into five leagues with cups to be won. It is interesting to note that despite equipment greatly improving over the years, and higher scores - archers still find it a struggle to achieve the final accolade of Grand Master Bowman - this is the reason that the classification of Bowman was introduced, so even the very best have something to strive for.

As the club grew through the 60's and 70's bigger and better grounds were needed, so we left Worthing Football Club for a small piece of land in Worthing woods. The new club ground must have played its part in inspiring the members to achieve greater success and meant the committee could explore the option of developing field archery. Gary Kinghorn, Tony Zottola and Mark Caine went all over the country attending field archery ranges and learning all they could about the sport. Gary Kinghorn then moved from target to field archery and soon excelled at this and was selected to shoot for Great Britain on several occasions, becoming World Champion. Our annual field shoot became a very successful tournament and we were selected to host the All British Field Championships in 1999.    Since then we have  hosted also the All English and Sussex County Field Championships.

In more recent years the committee has focused on developing the club, facilities and membership and we now boast a membership of around 100 archers of all ages and abilities from complete beginners to elite archers who have competed in the Olympic Games. We are now one of the few clubs in the country to offer outdoor, target and field archery 7 days a week.  Most clubs in Sussex only offer shooting on 1 or 2 days a week and very few offer both target and field archery.  We also have a Junior Club,  with members from complete beginners up to aspiring champions. We also have an active investment program in place for the club, providing not only regular maintenance but also new equipment.  We offer a bow loan service to beginners who join our club, after completing one of our beginners courses, to enable them to develop their technique and strength before committing to the purchase of a new bow.

Gary is not only a former World Field Archery Champion, but is also the only person in Sussex ever to shoot a perfect Albion score of 972. Gary coached fellow club member Gavin Sutherland at the Olympic Games in Rio 2016. He also coaches Bryony Pitman & Petra Ginman and last year was asked to be the assistant Team Manager for the World Field Championships in Ireland.

Doreen Cannon has received several awards over the years including the Worthing Sports Council Sportswoman of the Year for outstanding services to sport and by Sports England in 2006 for Outstanding Services to Sport. Currently she is County Secretary for Sussex and Chairperson of Martlets Guild of Archery Coaching.
Read 8465 times Last modified on Thursday, 22 April 2021 19:01
Beginners Courses Next post